Our police story begins back in the 1870’s when a small frontier community on the north shore of Lake Superior came into being.  Prince Arthur’s Landing evolved into two distinct communities.  The history of the Thunder Bay Police Service is a tale of two cities.  When Fort William and Port Arthur amalgamated in 1970, so did the two police forces.

The former Port Arthur police station continued to be used as a precinct office.

On January 15, 1978, Constable John Stephen Kusznier became the first police officer in the history of the Thunder Bay Police Service to lose his life while in the execution of his duty.

On January 19, 1987 the first phase of the Balmoral Police Headquarters was completed. The operational staff from both the north area precinct and the Donald Street moved into their new offices. In 1993 the second phase was completed and for the first time since its conception the Thunder Bay Police Force were together under one roof. 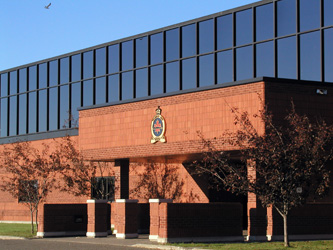 Today, the members of the Thunder Bay Police Service serves and protects a diverse community.  Policing in this province is regulated by the Police Services Act of Ontario.  The delivery of policing services has become one of the most complex and challenging professions.  In addition to law enforcement, police today rely on partnerships with the community to address the root causes of crime and disorder.

Increased attention is being given to the cultural diversity of our city and the extent to which the service composition is actually reflective of the Community.  The Thunder Bay Police Service continues to evolve in response to the needs of our citizens. function